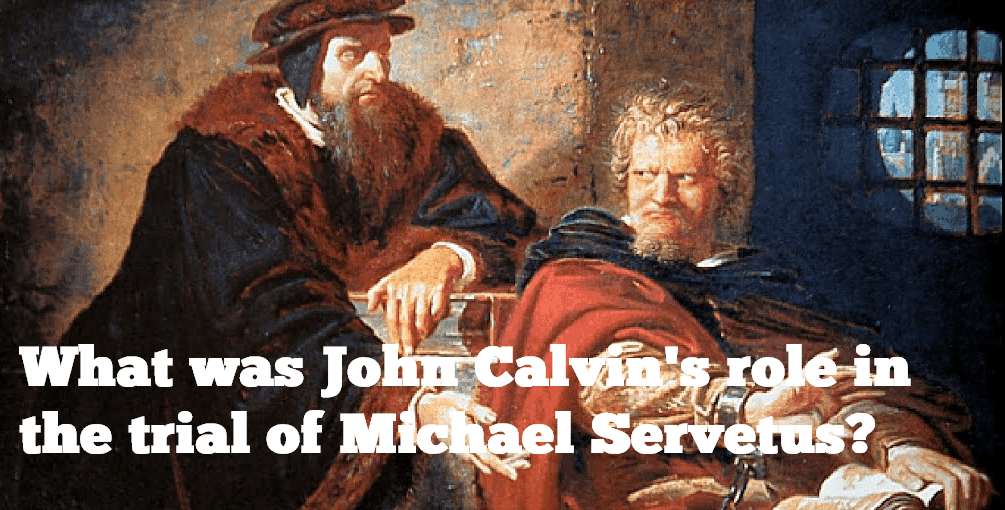 What was John Calvin’s role in the trial of Michael Servetus?

Did John Calvin kill his opponents like so many believe? The trial of Servetus is one of the most misunderstood parts of history.

By Michael Kelley in Christian History, News on August 13, 2019
No comments

One of the most beloved teachers in Christianity is also perhaps the most hated within certain Christian circles, and that teacher is John Calvin. Some show their disdain for the man by immediately bringing up the trial of Michael Servetus, bluntly saying, “Calvin killed Servetus.” Others across the internet make absurd claims about Calvin killing anywhere from 30 to 100 people besides Servetus, depending on the corner of the internet. I say “absurd claims” because such are always based on secondary sources without any evidence from primary source documents and the historical links with Calvin are incredibly tenuous. Yet, the burning of Michael Servetus, however, must be addressed because Calvin was involved in the trial. Yet, the facts of history have been gravely twisted by many of Calvin’s opponents.

The trial of Michael Servetus, who was burned at the stake for heresy in Geneva, is one of the most misunderstood parts of history. Specifically, the heart of the misunderstanding has to do with the role of John Calvin, the great reformer of Geneva, in the trial. The method that will be undertaken in examining the facts of this historical trial is to answer the following questions, 1, Why was Servetus burned, 2, Who burned him, and 3, What part in the matter was taken by John Calvin?

In order to answer these three questions we first need to understand who Servetus was. Michael Servetus was born at Villanueva in 1509 and was the same age as Calvin. In 1530 at age 21 he published his book On the Errors of the Trinity in which he said that the doctrine of the Trinity was:

… a three-headed Cerberus, a dream of Augustine, and an invention of the devil.

The book was immediately condemned as heretical by the Roman Church. Therefore, fearing imprisonment or death for his views on the Trinity, Servetus fled to Paris and changed his name to Michael Villanueva, taking the name of his hometown. While in Paris he began studying medicine where his brilliance shone; he even anticipated William Harvey in the discovery of the circulation of the blood. However, despite his brilliance he also was rather eccentric and soon published another pamphlet on Astrology, and consequently, was censured by the Catholic clergy, the book pulled from publication. Yet, the error was not viewed as bad as blaspheming the Trinity so he avoided imprisonment.

Once he finished his studies in medicine, he settled in the city of Vienne in 1539. It was from Vienne that Servetus, under his assumed name of Michael Villanueva, soon wrote another book against the Trinity titled Restitutio Christianismi and sent a copy to Calvin. Calvin very quickly realized that Michael Villanueva was the same person as Michael Servetus from a decade ago. Yet, Calvin engaged Servetus for a while, the two writing back and forth. Eventually, however, Calvin stopped, realizing it was a waste of time trying to convince him. During the course of their correspondence, however, Calvin continually warned Servetus against coming to Geneva. The state law at that time called for one espousing such heretical views to be put to death and Servetus’s first book was still fresh in the peoples’ minds. He was a wanted man by both Catholics and Protestants, and as such, Calvin knew that it would not go well if Servetus came to Geneva.

In the midst of Servetus’s correspondence with Calvin, however, it soon became publicly known in Vienne that Michael Villanueva was actually the infamous heretic from years back. Therefore, the bishop of Vienne arrested Servetus but because the two had become close friends, he purposely left the cell door unlocked and as soon as he left, Servetus walked out a free man. Yet, his cover was now blown, he had just been arrested for heresy, and his crime was a capital offence according to every state law of the time. One would therefore expect him to move to another town under another name to start his life again. Instead, however, as soon as he was out of prison he headed straight for Geneva where he attended a church service, was immediately recognized, and arrested.

Servetus was then tried by the Genevan City Council (i.e., the governing body of the city) for the crime of heresy regarding the Trinity. Calvin, as the leading pastor and theologian in the city, was brought in as an expert witness to lay out what Scripture taught and to demonstrate what made Servetus a heretic. For the trial, Calvin prepared a booklet containing examples of Servetus’s heresies that he presented to the Council. Calvin had also sent copies of the booklet to the other major reformers—including Philip Melanchthon, Martin Bucer, and Heinrich Bullinger—who also sent their testimonies to the Council about Servetus’s views. Every single reformer agreed that Servetus was guilty of heresy and ought to be punished. It must be noted, however, that the time that Servetus’s trial took place was at the climax of Calvin’s struggle with the City Council regarding who should control the theological and moral landscape of Geneva. Calvin, along with the other ministers in the city, believed it was the duty of the Church to enact discipline and/or the excommunication of members from fellowship; the City Council contended it was the State’s decision and prerogative.

The Genevan City Council, having reviewed the facts of the case, passed down a guilty verdict and sentenced Servetus to death by burning. Calvin immediately sought for a lighter sentence to save Servetus’s life, but the Council, seeking to show their authority over Calvin and the other ministers, refused to change the sentence. Calvin soon asked the Council to consider the more humane death of beheading rather than burning, but to no avail. In Servetus’s final days, both John Calvin and William Farel visited Servetus to pray with him and plead that he recant which he refused to do. In reading the history, one really gets the impression that Servetus went to Geneva in order to make himself a martyr and thereby elicit sympathy for his heretical views. The trial is an obvious sad mark in history but to ascribe Calvin blame, as many often do, is equally sad since he was only one who fought for a lighter sentence, and since Servetus actually was a heretic in violation of the State Laws of that time.