How can you say the world is getting better?

Is the gospel powerful and sufficient enough to end all evil worldwide, or is society getting worse despite the proclamation of the gospel?

Don’t you watch the news? How can you say the world is getting better? These are common questions asked regarding the postmillennial view of the Apocalypse. Yet such questions make the fundamental mistake of confusing true postmillennial eschatology with the heretical dominionistic ideology of Pentecostalism that purports to be Christian. This is evident in a satirical article posted by the Babylon Bee in May 2016, Postmillennialism Drops Out Of Eschatological Race, stating that since the next president would not be a pastor, “There’s just no way we’re realistically moving toward a blessed golden age of Christianity where faith, peace, and gospel-centered righteousness prosper among individuals and nations worldwide before the Second Coming of Christ.” The Bee also posted a fairly humorous article, The Bee Explains: Different Viewpoints on the End Times, that describes the three main views of the Apocalypse using the stereotypes of each. Since postmillennialism is admittedly the minority view, the article says, “Tough to find. Usually huddled up in a cabin in the wildlands, where no news of the impending doom facing our nation and world can possibly have reached them.”

Humor aside, however, in truth, biblical postmillennialism has nothing to do with politics or what disaster may happen on a particular day, and rather, when bad things happen, trusting that Jesus is reigning and in control, not Satan who is presently bound and unable to stop the advance of the gospel. The Kingdom of our Lord does not advance through carnal means like politics and voting, but instead, through the spiritual means given to his churches. When churches exalt Christ alone through Scripture alone in their worship and witnessing, the Kingdom advances. Yet, the advancement of the Kingdom is not like the Army’s 82nd Airborne; rather, the Lord likened it to be like yeast that works its way through the dough (Matt. 13:33).

The Lord quite literally split history with his coming, everything about the world changed and made new as the gospel went forth in those early years in the book of Acts, culminating with a seven year period from 64-70. In 69 C.E., commonly referred to by historians as The Year of Four Emperors, three emperors were assassinated in rapid succession and the temple of Jupiter on Capitoline Hill burned down in the unrest. This was followed the next year by the destruction of the Jewish Temple. John in the Revelation describes this period with collapsing solar system imagery, as though even the heavenly bodies could no longer be trusted (Revelation 6:12-17; cp., the destruction of Babylon in Isaiah 13:1-10, Edom in Isaiah 34:4, Egypt in Ezekiel 32:7-8, and the Northern Kingdom in Amos 8:9). The writer of Hebrews also says that the earthquake prophesied by Haggai 2:6 and described in the seventh bowl of Revelation, “signifieth the removing of those things that are shaken, as of things that are made, that those things which cannot be shaken may remain” (Hebrews 12:26-27). From Christ’s Ascension to 70 C.E., both Jewish and Gentile Christians were receiving a kingdom that could not be thus shaken (Hebrews 12:28), while the kingdom was being taken away from the unbelieving Jews (Matt. 21:43).

And I saw no temple therein: for the Lord God Almighty and the Lamb are the temple of it. And the city had no need of the sun, neither of the moon, to shine in it: for the glory of God did lighten it, and the Lamb is the light thereof. And the nations of them which are saved shall walk in the light of it: and the kings of the earth do bring their glory and honour into it. And the gates of it shall not be shut at all by day: for there shall be no night there.

There is no temple, the earthly temple has been demolished. Now, both the Father and the Son make up the Temple while the entire city, the Christian Church, is the Holy of Holies (Rev. 21:9-21). The Christian Church has no centralized location, millions of Christians gathering throughout the world each week to worship in both spirit and truth (John 4:21-24). Yet, it should be noted though that this passage at the end of Revelation is what the Christian Church is headed toward; it is not there yet. The New Jerusalem descends to earth; it does not simply appear on earth. Before the Lord returns, the world will be fully evangelized and even unbelievers (“the kings of the earth”) will hold churches in high-esteem. We see a microcosm of this in history after the conversion of Constantine; whether his conversion was genuine or not is inconsequential to the point. The Christian Church, once hated and persecuted by the world, was held in high-esteem by the world. Of course, Rome through her popes eventually began to impose homage from the top-down, but the true church will slowly work its way to the top through the preaching of the gospel, many Christians martyred along the way.

The first-century saints before 70 C.E., gave up their homes, families, lands, and even lives, for the sake of the gospel, so we, presently living in this “age to come” may have eternal life (Mark 10:29-30). Throughout this age also many Christians have been called (and will continue to be called) to give up many of the same things so subsequent generations may enter into the fruit of their hardships, described by John in terms of twelve fruits that are yielded every month (Revelation 22:1-2). This will all eventually climax with a fully evangelized world in which the curse will be completely undone, the earth subdued through medical science as God intended (Revelation 22:3; cp. Genesis 1:26-28). After a short time of loosing, Satan deceiving unbelievers once again, likely convincing them to take credit for the utopia that the gospel alone had accomplished, Jesus Christ will return to destroy both Satan and death itself once and for all.

It is an objective historical fact that the world is a lot better today because of the gospel than it was 1500 years ago, and especially than it was 2500 years ago during the Old Testament period when the nations were in darkness and ignorance when “night” was all there was on earth (cp. Revelation 21:23-25). In the same way, if the Lord tarries, the year 3,500 will be a whole lot better for gospel, the nations, and the church than now. We must guard against the tendency of tunnel-vision, watching the 24-hour news cycle all day which has to report something, and consequently, we are inundated with every evil deed being done today. It is a non-sequitur to conclude that since the world has so much evil, such will always be the case and the gospel will never change the state of things. That simply seems to be a fairly low view of the power of the gospel that is mere human-centered pragmatism.

The following chart by Transparency International is very encouraging as we in the local church take up the Great Commission. 17 out of the 20 least corrupt nations on earth today are Christian nations, specifically of the reformed faith of Luther, Knox, and Calvin: 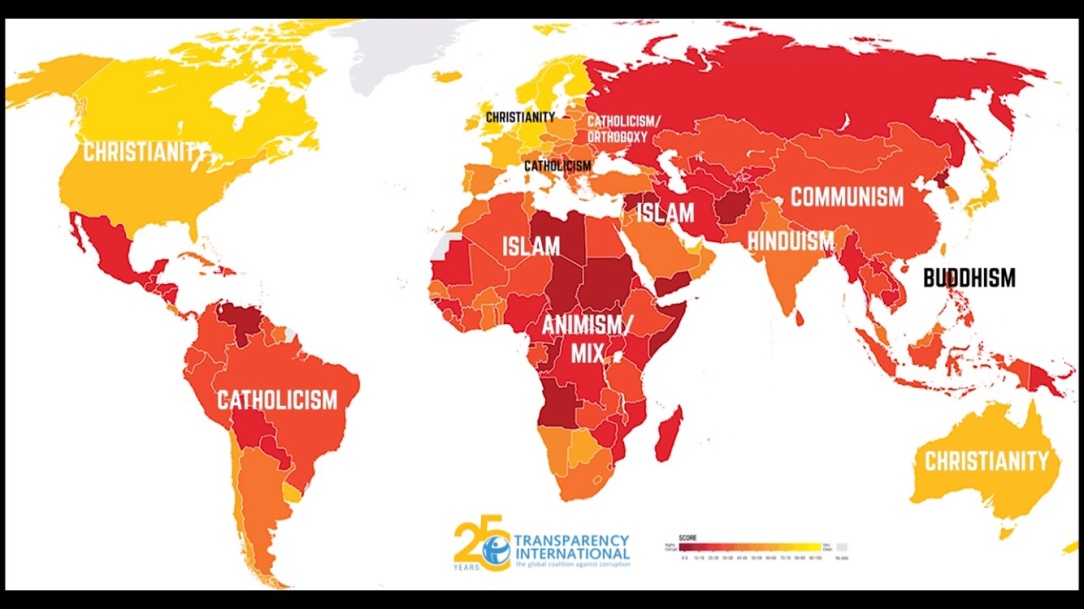 The bright yellow are the least corrupt nations, and those 17 nations are: Denmark, New Zealand, Finland, Sweden, Switzerland, Norway, Netherlands, Canada, Luxembourg, Germany, United Kingdom, Australia, Austria, Iceland, Belgium, Estonia, and Ireland, all of which are Christian. The three non-Christian nations that made the yellow are Singapore, Hong Kong, and Japan, which are largely Buddhist. Yet, before you begin to look into Buddhism, it is important to note that correlation does not necessarily mean causation. There are many Buddhist nations on the map that are bright red and orange, while even Christian nations that did not make the top 20 like the United States still have much lower corruption than the rest of the world. It is likely that Singapore, Hong Kong, and Japan have low corruption because of their close relationships with Christian nations, not because of their Buddhist religion which has not ameliorated corruption for other nations where it dominates.

The gospel does not conquer through politics, such changing with the wind. How many remember that Barack Obama told Pastor Rick Warren during the 2008 presidential election that he believed marriage to be between a man and a woman? The gospel will conquer the world but it will conquer through the sacrifices of those proclaiming it, whether by being ostracized by society or even laying down one’s life for the Lord. The blood of the martyrs is the seed of the church. So, when I see the world attacking Christian bakers who stand firm in the faith and refuse to be moved even if it means closing down their shops, I see that as one of the means by which the world will eventually be conquered for Jesus Christ. What Christian small business owners go through today for their faith in Jesus Christ will be honored by God and subsequent generations of Christians will benefit from the fruit of what Christians today are going through, and they in turn will also make sacrifices for their faith until the whole earth is “filled with the knowledge of the glory of the Lord as the waters cover the sea.”

For encouragement and exhortation on being a faithful witness to Jesus Christ in this world as the gospel goes out to all nations, I hope that you will consider purchasing a copy of my new commentary from Amazon: The Great Unveiling: A Postmillennial Commentary on the Book of Revelation.