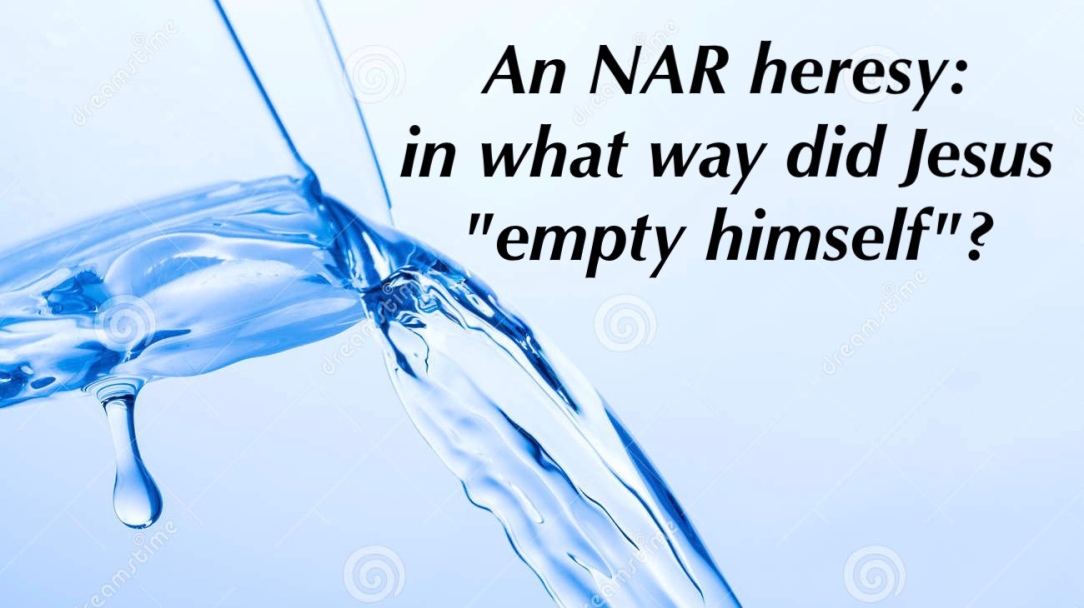 An NAR heresy: in what way did Jesus “empty himself”?

Does the filling of the Spirit allow Christians to work miracles like Jesus?

There is a very subtle yet pernicious heresy among NAR (“New Apostolic Reformation”) leaders like Bill Johnson or Joseph Prince that on a surface level seems to accept the deity of Jesus while in fact rejecting it. If you ask someone like Johnson or Prince if they believe Jesus is God, they will affirm the statement. Yet, what they believe is much more complicated, that Jesus was eternally God before he became a man, twisting Philippians 2:7 to say that when Jesus became a man, he completely emptied himself of even his divinity. Therefore, in the view of Bill Johnson and Joseph Prince, the miracles he did were done as a man in right relationship with God. Joseph Prince says in a blog:

Jesus is fully God. But when He came to earth, He literally emptied Himself, taking the form of a servant (see Philippians 2:7). That is why He needed to be anointed of the Holy Spirit before He could begin His ministry (see John 1:33). Though fully God, He did things by the power of the Holy Spirit. … Today, Jesus’ anointing has come upon you (see 1 John 2:20).1

This heretical NAR doctrine makes Jesus nothing more than an example, and from the last sentence quoted above to the end of Prince’s article, it becomes entirely human-centered: “Today, Jesus’ anointing has come upon you.” That is, since Jesus emptied himself, everything he did is possible for believers because he did not perform miracles as God but as a mere man. Prince then says that you have the responsibility to release Jesus’ anointing into your life and to “call upon his name when you need a breakthrough.” This language stinks of NAR vocabulary: “release his anointing” and “breakthrough” favorite expressions in the NAR.

One of the hallmarks of NAR churches is that instead of preaching from a particular text (i.e., exegeting the points from a main text and bringing in supporting verses for those points), NAR and Pentecostal churches have a very eclectic style of preaching and teaching. They may begin in one text, as Prince begins the article by quoting Leviticus 2:1, but the only relation that the texts have in common is the teacher’s topic that he or she brought to the Bible, then hunting for prooftexts to validate that topic.

In your relationships with one another, have the same mindset as Christ Jesus: who, being in very nature God, did not consider equality with God something to be used to his own advantage; rather, he made himself nothing by taking the very nature of a servant, being made in human likeness.

That is, Jesus is God, but he did not come with shock-and-awe, using his God powers for himself, to elevate himself to the throne of the world. He could have done that and he would have been totally righteous in doing so. Instead, however, he used his divine power and abilities to serve all people from the lowest to the highest, healing “all who were ill with various diseases, those suffering severe pain, the demon-possessed, those having seizures, and the paralyzed” (Matt. 4:24). The text is not saying that he did such things as a mere man who was filled with the Spirit. The application for us, therefore, is not that believers filled with the Spirit can perform miracles; instead, it is a call to obedience in our service to others even if it means death. The next verse makes this clear, saying:

And being found in appearance as a man, he humbled himself by becoming obedient to death – even death on a cross!

It is that “mindset” that believers are to have in their “relationships with one another” (verse 5). We are not to use whatever talents we have for our personal advantage, but instead, to serve others. Christians cannot miraculously heal the sick, give sight to the blind, voice to the mute, hearing to the deaf, or raising the dead as Jesus was able to do as God, such being the signs that he was the Messiah (Isaiah 35:5-6; Matt. 4:24). However, Christians do have particular talents and affinities that enable them to be of service to others.

Yet, the Lord teaches in Matthew 25:14-30 that there are disparities in the distribution of talents (I realize that “talent” in the passage is a unit of money, but there is a clear application to the English word “talent”). Some people start out with more advantage than others, but that is not an excuse for those with less advantage. In fact, the servant who received only one talent was rebuked for doing nothing with what he had. The Master did not say, as so many social justice warriors today, “Oh, poor you, it’s not your fault. The others should have checked their privilege and elevated you to their level so you could do something for me.” No, he said, “You wicked, lazy servant!” The Master did not expect the man to have gained five more bags of gold like the man who had initially received five. The man who received only two only gained two more and the Master said, “Well done, good and faithful servant!” The Lord expects us to use the talents we do have, not complain about the hand we are dealt. This was the same rebuke that the Lord gave the church in Sardis, saying, “Strengthen what remains and is about to die, for I have found your deeds unfinished in the sight of my God” (Revelation 3:2).

In short, Jesus is God and the miracles he did evinced that he was the Messiah. As Christians, we are not called to work miracles (which we cannot do anyway). We are called to serve Christ and serve others with the talents we do have just as Christ chose to use his natural abilities as God to serve rather than being served. We are called to be good employers or employees, good husbands, good wives, good fathers, mothers, and children. If someone claims to have a so-called “gift of healing,” then I want to see hospital records, I want to know which doctor the healed person was seeing, and I want to be able to contact and verify the healing. When Jesus performed a miracle, there was no doubt that it was a miracle, and yet, so-called “healing stories” today are nothing more than stories with no way of verifying the facts. As Christians, though, our faith is based on facts and evidence; the birth, life, death, and resurrection of Christ were historical events, you can place them on a timeline. The gospel writer Luke was very meticulous in his historical accounts, saying that after he had “carefully investigated everything from the beginning,” he decided “to write an orderly account” (Luke 1:3).