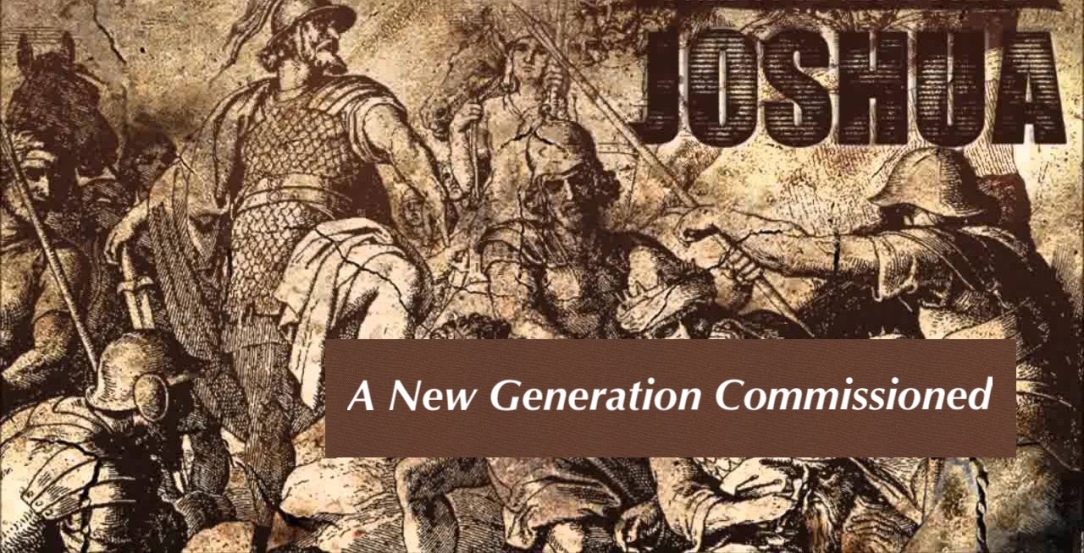 Today I began reading through the book of Joshua, an exciting and grim adventure story of war. Yet, this book conveys real history and is part of the inspired, holy scriptures. While God called Joshua to be a general and lead the army of Israel in the holy conquest of Canaan, the book is about much bigger issues than the conquest and possession of a far away, ancient land, nor is a book merely for study by military historians and strategists. The book involves issues that touch our lives and our faith today.

Exodus is the book of redemption, Moses leading the Israelites out of bondage into freedom; Joshua is the book of commission, God’s people conquering the land he promised to give them. In the New Testament we know this promise is now expanded to the entire earth, the Lord saying to his Church, “All authority in heaven and on earth has been given to me. Therefore, go and make disciples of all groups of people, baptizing them in the name of the Father and of the Son and of the Holy Spirit, and teaching them to observe everything I have commanded you. And surely I am with you always, to the very end of the age” (Matthew 28:18-20). The apostle Paul also says to the church in Rome that part of our hope is “that the creation itself will be liberated from its bondage to decay and brought into the freedom and glory of the children of God” (Romans 8:21).

The first five chapters of the book of Joshua could be outlined under the theme, “Preparing the Church.” The church’s commission has remained constant for two thousand years since Christ rose again and ascended to heaven having all authority in heaven and earth, casting Satan out, unable to bring any more charges against the saints of God (Romans 8:33; Revelation 12:5-9).

In chapter 1 of the book we meet the new leader of God’s people after the death of Moses, the great leader of the Exodus. Although the people had been redeemed from slavery, they now faced an uncertain future as they took up the Lord’s Commission for them. The book of Joshua could be likened as the Old Testament books of Acts and Revelation, the church having stepped through the threshold of a new age. The book begins thusly:

After the death of Moses the servant of the Lord, the Lord said to Joshua the son of Nun, Moses’ aide: Moses my servant is dead. Now then, you and all these people, get ready to cross the Jordan River into the land I am about to give them – to the Israelites.

Even the best, most godly leaders like Moses (or Peter, Athanasius, Luther, Simons, de Molina, C.S. Lewis, Lloyd-Jones, Adrian Rogers, Ravi Zacharias, etc.) do not lead forever. There comes a time in every ministry when God calls a new generation to take up his Great Commission, conquering the world for Jesus Christ. Of course, with a new generation always comes new ideas and new ways of doing things, many pastors throughout the years offered as a sacrificial lamb for daring to suggest the church make some changes. Yet, it is just as much of a mistake for a young pastor to completely ignore the wisdom of tradition. Tradition can often help a new pastor streamline the church’s ministries so the church does not waste time doing something that past generations already had tried. As each generation of Christians embarks into new fields of conquest, the wisdom of tradition and new ideas must be carefully weighed. God buries each of his workmen but his work goes on; we must neither forget the past nor try to embalm it.

In his classic Idylls of the King, Tennyson put some wise words in the mouth of Arthur as his funeral barge moved out to sea to Avalon. Sir Bedivere cried out after that great battle against Mordred, “For now I see the true old times are dead.” However, the king knew better and Arthur replied:

The old order changeth, yielding place to new,
And God fulfills himself in many ways,
Lest one good custom should corrupt the world.

Tennyson, “The Passing of Arthur.”

Moses is mentioned fifty-seven times in the book of Joshua, showing that Joshua respected what Moses had done leading God’s people. Joshua worshipped the same God as Moses and he obeyed the same Word that God had given the people through Moses. There was continuity from one leader to the next but not always conformity. Joshua was his own man; he did not try to be Moses. Moses is called God’s servant twice in the opening verses of Joshua, but Joshua also was God’s servant (Joshua 24:29); what is important is not the servant but the Master. A wise leader does not abandon the foundation laid by the past, nor does he continue to build the foundation. Rather, a wise leader builds on the past while he or she moves toward the future.

The book of Joshua is a microcosm of the church’s Great Commission in action. God commissioned the next generation, having been brought out of slavery into freedom, to bring the creation in subjection for the King. Joshua was the new leader commissioned to lead God’s people against his enemies. Of course, today our enemies are not flesh and blood but are spiritual; we do not conquer by the edge of the sword.

We must not take the book of Joshua wholly typological, but must remember that we are reading history. God in the historical time of Joshua was preparing a nation that would bring his Messiah into the world so the true children of Abraham (those of faith among Jews and Gentiles) could take up the more important Commission of conquering the world through the preaching of the gospel.

Lastly, I would like to point out that God could have sent an angel to conquer the promised land; instead, he chose to use a man and give him what he needed to get the job done. God could have chosen much more efficient means to evangelise the world. If he is all-knowing (and he certainly is), he knows what it would take for each and every person who has ever lived to believe freely in Jesus. Instead, though, he chooses to use us – fallen, sinful, misguided humans to take his gospel to the world. He chooses to include us in his plan of redemption even though he could do it in a perfect manner so no one would be lost, all freely choosing him. It is a blessing, a gift, to be able to share the gospel with someone, even if it is simply planting a seed; it is even more of a gift to see someone actually come to saving faith and know we had a part in such of miracle by God. May we never take such a gift for granted, always striving to shine the light of our Christian faith in the world, refusing to cover it up no matter the consequences.