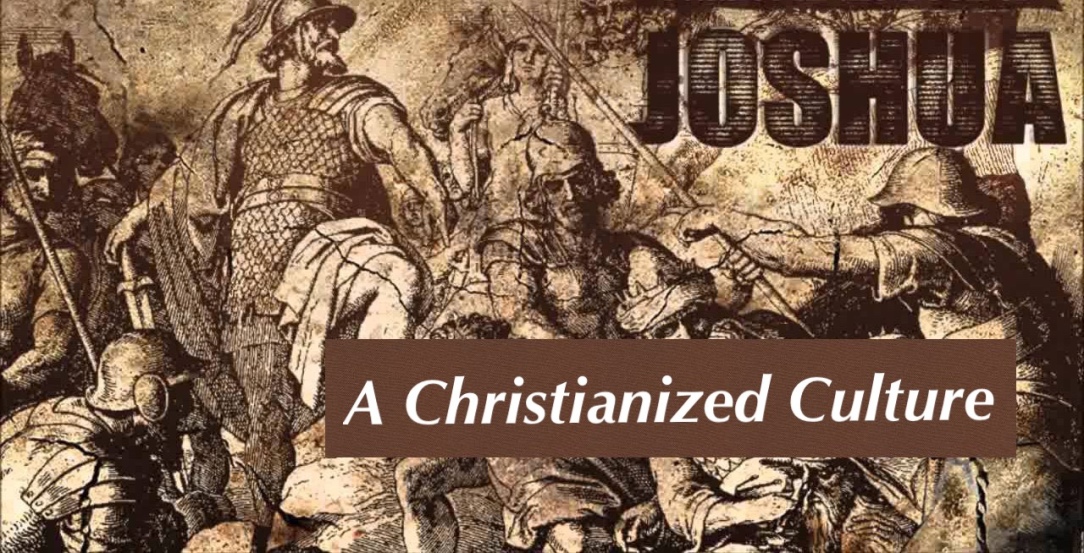 Lessons from Joshua: A Christianized Culture

The Christian’s mandate is to make disciples, not merely converts, busy as salt and light in the world.

Last week I began reading through the book of Joshua during my morning devotional time and have been writing a short series of lessons from this action-packed book. The last of Israel’s three campaigns for conquering the promised land concludes in chapter 11 of the book of Joshua. Chapter 12 then gives a summary of Israel’s victories. The last verse of chapter 11 says:

So Joshua took the entire land, just as the Lord had directed Moses, and he gave it as an inheritance to Israel according to their tribal divisions. Then the land had rest from war.

Here we see an apparent contradiction with Joshua 13:1 in which the Lord tells Joshua that there are still very large areas of land to be taken over. However, this is no contradiction; Joshua and the army of the Lord took control of the entire promised land at the end of chapter 11, destroying the key cities with their kings. Israel had not destroyed every little town with its ruler, nor bring every citizen into subjection, but did enough to break the enemy’s power and establish control over the land. Once this was done, no more major conflicts, Joshua assigned each tribe its inheritance which we read about in detail from chapters 13-22. Within that inheritance, however, there was still much work to be done gaining mastery over the land.

Often when we think of evangelism, we think simply in terms of numbers. How many people can we get to say a prayer at a revival? Yet, not even a fortnight later and the evangelist has no idea where any of those people may be. This may look good on an evangelist’s website, saying that so-many numbers of people came forward to receive Christ, but it is not biblical evangelism. Dr. B. Gray Allison, the late founder of my Alma Mater and godliest man I had the honor to sit under, used to say in part of his definition of evangelism: “Evangelism is not finished until the person is actively involved in a New Testament church.”

Our Commission from the Lord is not to make converts, simply getting people to say a prayer and be nominally Christian. That is the Muslim way of evangelism which has resulted in the vast majority of Muslims around the world “Muslim in name only.” We are not to force people in line from the top-down. Rather, our Commission is to “make disciples” of all people-groups (Matthew 28:19-20). Christians are in the business of planting self-sustaining churches of faithful believers. The Great Commission is not finished in an area simply because everyone in that culture has heard and nominally accepted the gospel. The people need to be taught what it means to submit to Christ as Lord because apart from repentance, doing an about-face from how one has been living, he or she will perish alongside those who have never expressed even a nominal belief (Luke 13:3). The church’s conquest of the earth will not be ultimately finished until, as the prophet Habakkuk says, “the earth is filled with the knowledge of the glory of the Lord as the waters cover the sea” (Habakkuk 2:14).

The Lord also says in Matthew 24:14, “And this gospel of the kingdom will be preached in the whole world as a testimony to all people-groups, and then the end will come.” The word ethnos, often translated nations, does not refer to geopolitical boundaries but to a community (or tribe as Joshua 11:23 says above) united by a common language, culture, and economy. For example, the United States is not merely one ethnos, New Englanders having a different culture than Midwesterners, both different from Southerners, and each one different from Cajuners or Pacific Coasters. Furthermore, the deaf have also become their own ethnos. According to the Joshua Project, there are an estimated 17,446 different ethnos (people-groups) in the world, 7,408 of which remain completely unreached which encompasses nearly half of the world’s population: 3.23 billion people (41.7%). Often, Christians drift into an “end times daze,” simply wanting Christ to return to fix everything. Yet, Christ himself specifically says that the end will not come until the gospel has gone out to all the ethnos; he is not coming back to a world like the present in which nearly half of the ethnos have never even heard his name.

Eventually, the world will be Christianized; the Lord promises it. Yet, even when the whole world has heard and nominally accepted the gospel, the Great Commission will not be finished. Our Commission mandates that we make disciples (not converts) of every people-group, and therefore, our task is far from finished even in the west. If I had give the central text which caused me to rethink my eschatology and adopt the minority, postmillennial perspective of Baptist giants like George Truett, B.H. Carroll, and Augustus Strong, along with giants of the First Great Awakening like Jonathan Edwards, it would be the Great Commission, Matthew 28:18-20. I have a high view of the Gospel’s power to change the world. Regardless of your eschatological view, though, the Great Commission is your marching order if you are a believer in Christ.

Many in the church in Thessalonica had become “end times busybodies,” hyper-eschatologists, devoting all their time and studies to looking for Christ’s return (2 Thessalonians 3:11-15). We must not leave the world for our own private church bubbles, filling our days trying to decipher what the Bible says about the Lord’s return in books, at conferences, or on YouTube. The wise Solomon says at the close of Ecclesiastes, “the writing of many books is endless, and excessive devotion to books is wearying to the body” (Ecclesiastes 12:12). We do not “wait” for Christ to come back for us through extensive study of eschatology, but by applying the Bible to our lives, keeping ourselves busy as salt and light in the world and making disciples of all people-groups (Matt. 25:24-30).