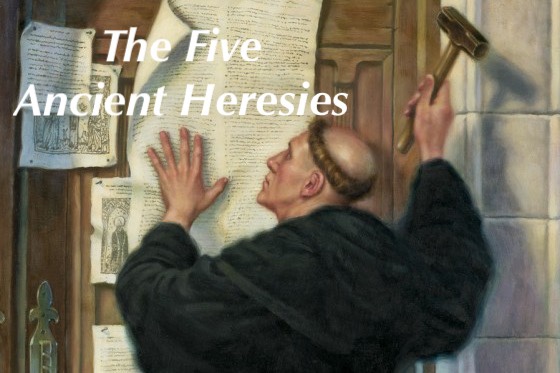 From almost the beginning of Christianity, churches have had to contend with the same five basic heresies. Although the people who devised these heresies may be dead, the heresies themselves are not. A very familiar passage in Ecclesiastes says:

What has been will be again, what has been done will be done again; there is nothing new under the sun. Is there anything of which one can say, ‘Look! This is something new’? It was already here, long ago; it was here before our time.

Virtually every cult and major false doctrine today – those who continually come knocking on your door – has a very close relationship to at least one of the five major heresies. Even a major Christian denominations like the Roman Catholic Church has ties to two of these heresies, Catholicism a mixture of the Judaizing and Pelagian heresies. The earliest heresy was that of the Judaizers, a synthesis Old Testament Judaism with New Testament Christianity. Next in history came Gnosticism which was an attempt to blend pagan philosophy with Christianity. While the Judaizers fiercely clung to the past, the Gnostics represented a radical break with the past, which is typical of what always happens. Christians, in reaction to one extreme, swing over to the other extreme. The five basic heresies that have plagued and continue to plague churches even today, and which may be clicked on to read more in-depth: